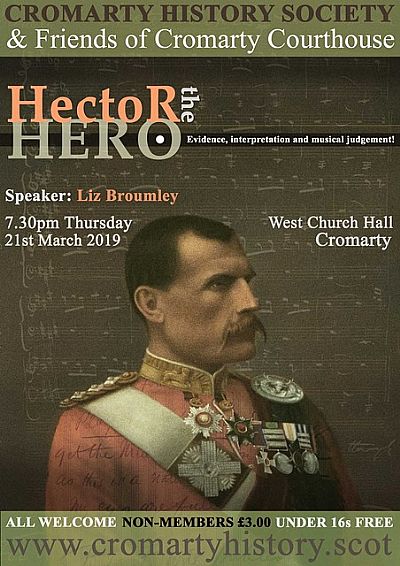 Hector Macdonald was born at Rootfield, on the Black Isle in March 1953, and died in Paris, in March 1903. Within days of his death James Scott Skinner composed the haunting melody ‘Hector the Hero’ as a coronach or lament in his honour, calling his death a ‘national calamity’. Macdonald had joined the ranks of the British Army (Gordon Highlanders) in 1870 and rose through the ranks to gain a commission (1880) through his skill and bravery in the 2nd Afghan War. He went on to take part in the 1st Boer War (1880/81), various Sudan Expeditions (1884/99) where he was credited with playing a major role in the success of the final battle at Omdurman. He took charge of the Highland Brigade during part of the 2nd Boer War (1899/1902). During his fighting career he was awarded 10 decorations, 14 clasps and was mentioned in 11 dispatches. He became an immensely popular and revered soldier across Britain but especially in Scotland and the Highlands. His posting to Ceylon in 1902 as Military Commander in Chief led to conflict with the local colonial society, who perhaps did not take too kindly to the son of a crofter taking such a privileged role in their society. Rumors about his sexuality surfaced and when these were published in the press Macdonald committed suicide. Many of his supporters at home disbelieved the rumours and were determined to honour the man they revered with monuments, poetry and music — all of which help to keep his name alive long after some of his detractors have been forgotten.

Liz considers herself a fairly typical north west European mongrel, but one with enough Scottish ancestry for her to feel very comfortable living in the north of Scotland. Initially trained in the social sciences she worked in academia and industry in Scotland before an interest in computing seduced her into a major career shift. After dabbling in the dark arts of artificial intelligence she gained a doctorate in computer science. She spent the rest of her career as an academic, both tutoring and doing research. Her final role was to run a small research unit on e-learning within UHI, cleverly combining her social and computer sciences background with her love of the Scottish landscape. Since retiring she can often be found huffing and puffing her way up hillsides or tormenting a perfectly innocent fiddle, which is how she became acquainted with Hector Macdonald and James Scott Skinner.