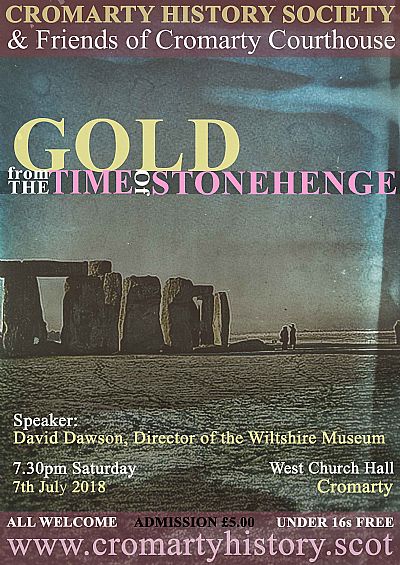 A Special Summer Talk: Gold from the Time of Stonehenge

We are delighted to welcome David Dawson to Cromarty. The Wiltshire Museum houses Britain’s best Bronze Age archaeology collection featuring gold from the time of Stonehenge. It is the largest collection of Early Bronze Age gold ever put on public display in England and the displays transform public understanding of Stonehenge in helping to explain the extraordinary sophistication of the remarkable people who used the world’s most famous prehistoric monument.

Spectacular treasures from the Age of Stonehenge were unearthed by antiquarians and archaeologists in the late 18th and early 19th centuries. However, until recently, it has never been possible to give the public permanent access to them. Now, the Wiltshire Museum has been able to create a secure and stable environment in which they can be enjoyed by visitors to the Stonehenge and Avebury World Heritage Site from Britain and around the world. David’s talk will outline the remarkable craftsmanship and stunning objects found with the burials of the chieftains, important women and priests who used Stonehenge for their ceremonies.

David has been Director of the Wiltshire Museum since 2008 and has a wide range of experience in museum management, from practical curatorial work to national and international policy and the use of digital technology. He is a Fellow of the Society of Antiquaries and an Associate of the Museums Association. He has worked as a field archaeologist in the UK, France and Italy, which included several seasons as a Site Supervisor for English Heritage. His museum career has included the roles of cataloguer, curator (Canterbury City Museum and Oxfordshire Museums Service) moving to the Museum Documentation Association (MDA) to give advice and provide training for museums on the use of information technology, whilst also contributing to the MDA’s work on the development of documentation standards.

He was a policy advisor with the Museums, Libraries and Archives Council, working in a number of roles, particularly in exploiting digital technology to improve public access to museum and archive collections. He acted as an expert advisor for the New Opportunities Fund programme for the Digitisation of Learning Materials as well as on the creation and implementation of technical standards. He managed the ‘Their Past, Your Future’ programme for the Big Lottery Fund commemorating the 60th Anniversary of the end of WW2. In addition, David has represented the UK on a number of international expert and advisory panels including as the UK National Representative on EU Digitisation Programmes and was Chair of the UK UNESCO Memory of the World Programme.

Cromarty History Society usually meets in the West Church Hall, Cromarty at 7.30pm on the the third Thursday of each month, September - April