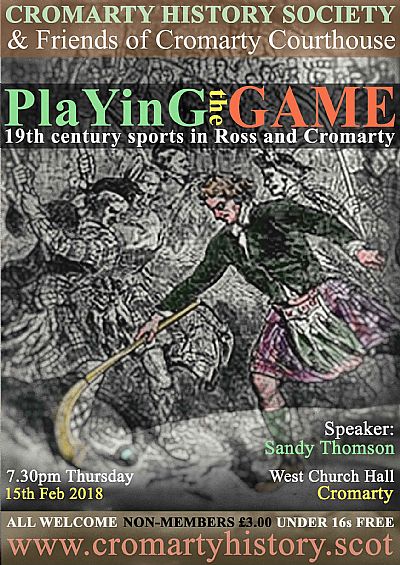 Playing the Game: 19th Century Sports in Ross and Cromarty

The second half of the 19th century saw a remarkable explosion of interest in team games throughout the UK. Traditional ‘lfolk games’ became standardised and organised on a national basis, and the young men (they were mostly men) of Ross and Cromarty were enthusiastic participants in cricket, football, rugby, etc. This talk will explore some of the reasons behind the growing interest, and share what we know of the sports and games played in Cromarty at the time.

Sandy Thomson is a former Senior Lecturer in Education at the University of Strathclyde who retired to Cromarty in 1997, when he re-kindled his interest in history by studying for a Diploma in Scottish History at the University of Dundee. He was an active member of our Committee for many years and served two terms as Convener. He has been a regular speaker at Cromarty History Society meetings on a variety of topics of local interest, and was instrumental in securing the publication of Eric Malcolm’s two books on Cromarty history ‘The Cromarty We Knew’ and ‘Heroes and Others’. In 2011 he organised the Conference to mark the 400th anniversary of the birth of Sir Thomas Urquhart of Cromarty, and in 2013 he chaired the group responsible for the ‘Cromarty Homes and Heritage’ project.