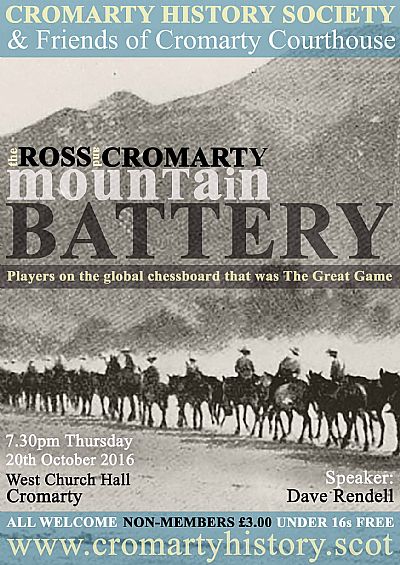 The Ross and Cromarty Mountain Battery

Cromarty History Society’s October meeting will be an account by Dave Rendell of a small group of highly trained men, created after Army Reforms in 1908 as part of the 4th Highland (Mountain) Brigade. There were three batteries within the Brigade, the Argyll, the Bute and Ross and Cromarty and they were unique, being the only mountain artillery batteries within the British Army. The gunners of the Ross and Cromarty Battery were sent to Salonica in 1916 to confront the Central Powers in the Balkans, taking part in what has often been descried as the “forgotten battlefront” and a “sideshow” to the war on the Western Front. In February 1919, War Diaries record that members of the Battery were asked to volunteer for action in the Caucasus. For David this is the most intriguing part of their story. Though still shrouded in some secrecy, it is clear the men of the Ross & Cromarty Battery were closely involved for a short time in the violent territorial reorganisation that followed the break-up of the Hapsburg and Ottoman Empires. This talk will be a fascinating insight into a group of men who trained on the hills and mountains of Wester Ross and took part in pivotal events in the Great War years.

Dave Rendell trained as a geography teacher at Bede College, Durham and worked in a number of English LEAs before becoming a Headteacher in County Durham. Since his retirement and moving north, Dave has renewed his interest in archaeology and local history. He joined the Inverness and Black Isle U3A and was Programme Secretary for a number of years until becoming Chairman and is now leader of its Geology and Earth Science Group. In 2014, members of the U3A History Group began to research aspects of the Great War. Dave chose to look at the local Territorial Units and at the Ross and Cromarty Mountain Battery in particular.