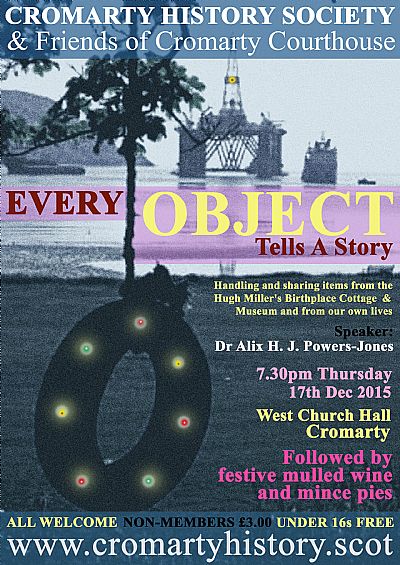 Why is an object (artefact, document) important to an individual? Answer: because it tells a story.

In this Christmas session led by by Alix Powers-Jones, the audience will be able to handle objects selected from the Hugh Miller's Birthplace Cottage & Museum collection and beyond in an interactive session. Audience members are also invited and encouraged to bring an item from home that has special significance to them to share its story with others.

Alix Powers-Jones is, "by profession, an observer of the material record and, by passion, a dipper into narrative. After years as an Environmental Archaeologist she merged these twin foci by becoming Director of the Highlander's Museum, Fort George before a move to NTS Hugh Miller's Birthplace Cottage and Museum, Cromarty".

A warming glass of mulled wine and mince pies will be served afterwards.