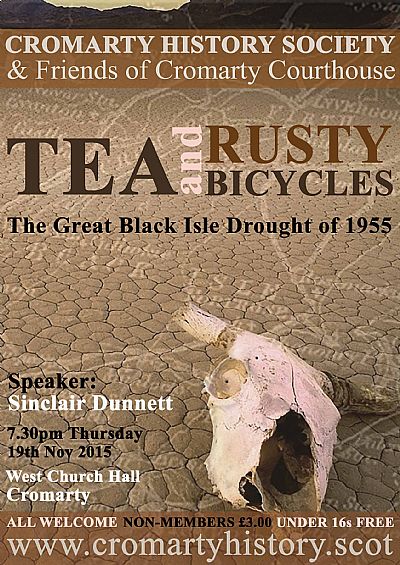 Sinclair Dunnett has travelled widely throughout the world working in wildlife research and management. When he returned to Scotland in 1975, he set up wildlife and adventure tours with his wife Kathleen. These were initially around Inverness but their itinerary soon extended to trips to the Scottish Islands. This was followed by several overseas destinations including Iceland, Botswana and Alaska. For most winters over the last 30 years, Sinclair has lead tours in Poland seeking bison, elk and wolf. Sinclair grew up on the Black Isle and was at Cullicudden Primary School in the summer of 1955 when drought affected a number of areas in the north of Scotland. In the north ridge of the Black Isle wells ran dry and people - some without cars - had to walk to get even enough water for basic drinking and cooking purposes. This talk to the Cromarty History Society is an anecdotal account of the challenges of that summer, the subsequent coming of the arterial water scheme and reflects generally on water access.