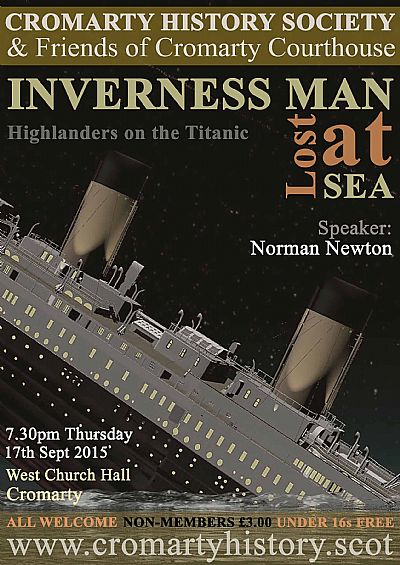 The Cromarty History Society launches the 2015-2016 season on Thursday 17th September with a talk by well known local historian, Norman Newton, who will speak on the fascinating subject of the Titanic and Highlanders aboard her. He will identify some of the local victims of the 1912 tragedy, using local newspapers, family history records, and lists of passengers and crew. The talk focuses especially on two Gaelic-speaking sisters from the Isle of Skye and their families. Norman Newton was born in Glasgow, spent his teenage years in New Zealand and attended college and university in the United States, returning to Scotland in 1971 to pursue a career as a librarian. He has been in Inverness since 1980 and after a stint as the Reference Librarian at Inverness Library he ended up in charge of reference and information services for the whole Highland Libraries network of 50 libraries, with a special interest in local history. He has written several books on Scottish islands and on the local history of Inverness. After 5 years of 'retirement' he continues to research Highland history and is currently engaged in a project following the progress of World War I through local newspapers