One hundred years ago, in the dark days of World War I, the cruiser HMS Natal blew up at anchor in the Cromarty Firth and sank to the bottom with the loss of 421 crew and civilians. 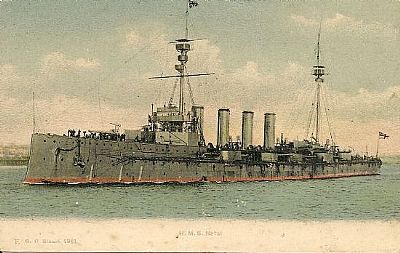 In this anniversary year, Cromarty will commemorate this sad event on Wednesday 30th September - the 110th anniversary of the ship's launch. A small committee representing the Community Council, Cromarty Arts Trust and the Cromarty Courthouse Museum is currently making plans for an event which will include the marching band of the Royal Marines, a contingent of the Inverness Sea Cadets, and the unveiling at the harbour of a panel telling the story of the tragedy. The panel will be unveiled by the grand-daughter of Captain Back of the Natal.

As further detals emerge, they will be reported here and on oter local websites. The full story of the Natal can be found at www.hmsnatal.co.uk