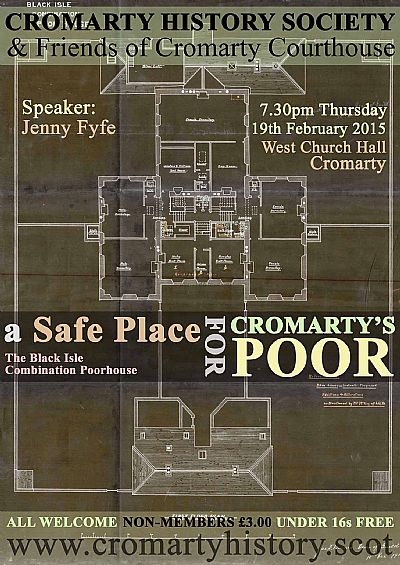 After an academic career in Canada which combined History with Library and Information Science, Jenny Fyfe retired to Cromarty. Here she added local history to her more general historical interests. The social history of closed institutions has been a focus of some of Jenny’s work, resulting in the publication of Books behind Bars: the Role of Books, Reading, and Libraries in British Prison Reform, 1701-1911, and lesser projects on schools, emigrant ships, and now poorhouses.

Around 1855, seven Black Isle parishes, including Cromarty, formed a Combination to provide a poorhouse as sanctioned by the Scottish Poor Law of 1845. The building, purpose-designed by William Lawrie, was opened in 1859 in Fortrose and functioned as a poorhouse until 1946. The governance of this institution, the daily life of the residents, identification of those from Cromarty, a crime planned and executed by a resident, and medical matters such as several outbreaks of smallpox in 1920, are some of the topics to be discussed in the talk.