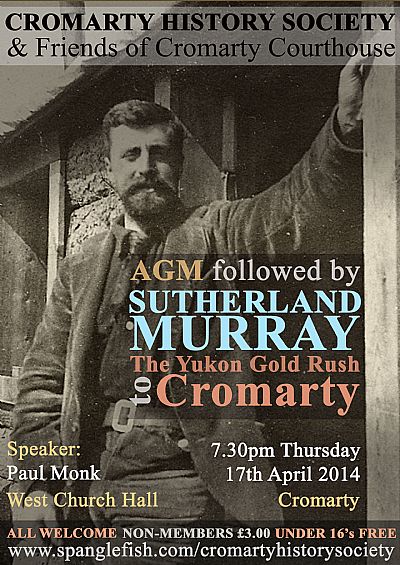 Following a short AGM, the final talk of the season is given by Paul Monk, Curator and Chair of Trustees at Cromarty Courthouse Museum. Paul trained a as a geographer and geologist and worked in education for many years. Following early retirement, he developed a second career as a museum curator in Ashby de la Zouch, Leicestershire and moved to Cromarty in 2008.

Paul’s talk follows Sutherland Murray’s gold prospecting career in the Yukon between 1898 and 1905. Sutherland subsequently lived for a number of years with his sister in St Ann’s, one of the fine old merchant’s houses on Church Street in Cromarty. Having access to his unpublished photograph collection, Paul takes us on a fascinating journey with a man who is still remembered by some of the older residents in Cromarty as ‘the one-eyed, one-armed gold digger’!

After this final talk, Cromarty History Society has a summer break and resumes on Thursday 18th September 2014. Thank you to all our speakers for another fabulous season of talks and our members and supporters for continuing to come along to meetings. We look forward to seeing you all in the Autumn.