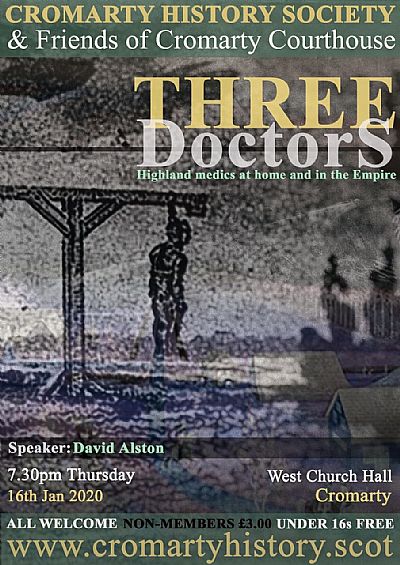 Thursday 16th January 2020: Three Doctors — Highland medics at home and in the Empire

In the 18th and 19th centuries Scotland’s system of medical training produced many more doctors than were needed at home and Scottish doctors were to be found throughout the British Empire, serving in the army, as ship’s surgeons, and on slave plantations. This talk describes three Highland doctors who worked in India, in the Caribbean, and in Cromarty — and who both healed and harmed in the places where they practised their profession.

Born and brought up in the Highlands, David Alston is a freelance historian and author who has been a youth worker in Toxteth (Liverpool), a schoolteacher in Wallsend (Tyneside), and (in the Highlands) an adult education organiser, a museum curator, a local authority councillor, and chair of an NHS Board. For twenty years he has been researching the role of Highland Scots in the slaveworked plantations of the Caribbean, especially Guyana and is among the first Scottish historians to address the issue of Scotland’s involvement with slavery.