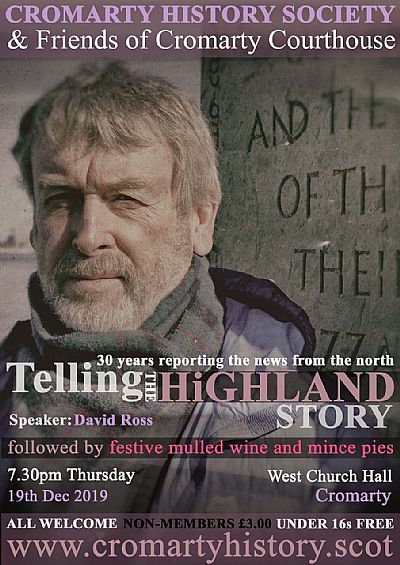 David will review his years working in the Highlands and Islands and the range of stories he covered in that time both for the paper and in his book — from the demise of the Dounreay nuclear plant in Caithness to the launch of the modern community land movement in Assynt; from the battle over the Skye Bridge tolls to Highland religion and Cromarty’s own fight over the ship-to-ship oil transfers. It will consider these in the context of the old adage that ‘journalism is the first rough draft of history’. It will also address the continuing controversy over Highland history, particularly the Highland Clearances, and the treatment it is afforded in the media.

David Ross has lived in Cromarty for well over 30 years. The Ross-shire community was the northern outpost of the (Glasgow) Herald’s operation, while he was the paper’s Highland Correspondent. He had come north with his family from Edinburgh, where he had met his future wife Mary, the daughter of the renowned poet Sorley MacLean. They were both students in the capital, and married there. After studying history at Edinburgh University, he began his career in journalism on the Scottish edition of the Times Educational Supplement before joining the staff of the Herald, initially in the paper’s Edinburgh office.

Two years ago, The Scottish Parliament noted his retirement from The Herald as a journalist who had covered the Highlands for that newspaper since 1988, praising his dedication to the region and further noting his award in 2017 of the Barron Trophy for lifetime achievement in journalism.

In October last year his memoir of his working life, was published by Birlinn entitled “Highland Herald.”