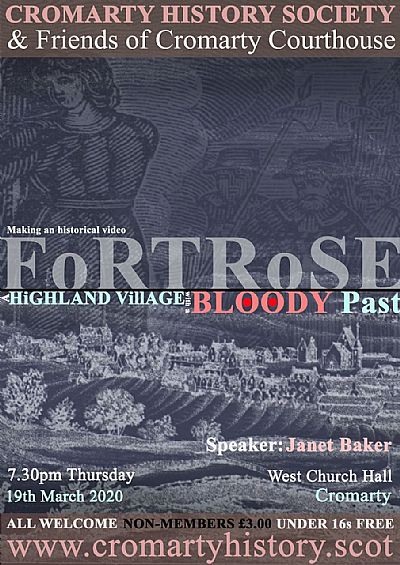 Thursday 19th march 2020: ‘Fortrose, a Highland Village with a Bloody Past’ — making an historical video

In 2018 Janet Baker published a short, six minute video on the YouTube platform with the title Fortrose, a Bloody Past, an article about which followed in the Autumn edition of Chatterbox. Her researches identified places where, five hundred years ago, places of execution as well as punishment and mutilation were carried out within the village, characterising it as having a gory history. She will be talking about the inspiration for making the video, learning the process of making a video from the starting point of no knowledge at all, sourcing suitable images and issues about copyright together with finding a suitable voice-over and learning about uploading the finished piece to the internet as well as publicising it.

Janet spent her working life as an archivist within local government, moving to the Highlands from North East England in 2010 to take up the position of Education & Outreach Co-ordinator for Highland Council. This sparked her interest in Highland history and the Gaelic language and, since retiring in 2017, she has been able to devote time to making videos with historical content. She has been a resident of Fortrose since moving from Inverness in 2015.